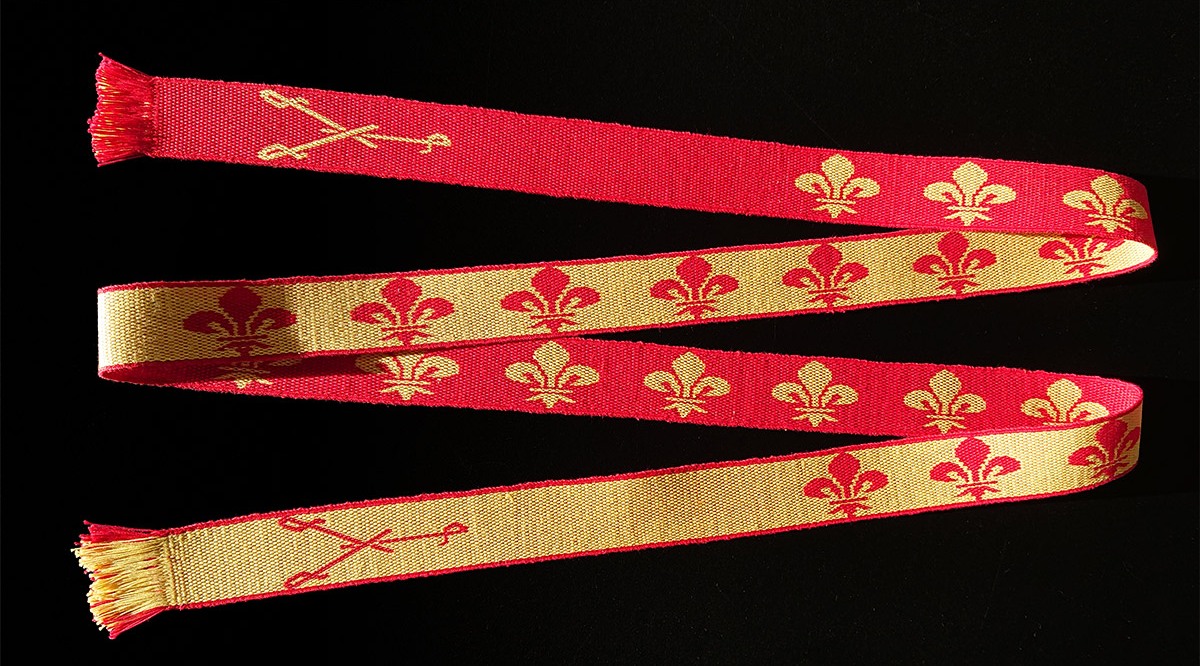 Baron Master Antonio di Rienzo Ruspoli was elevated to the Order of Defense at Plague Wars End Game XXXIII (May 2021).   Some months prior to this event, he had been pleased to accept my offer to make a set of garters, incorporating fleur-de-lis and the MOD device.

Antonio liked the idea of the garters having fleur-de-lis round the calf section, with a plain section dangling down, and finishing with the 3-sword motif about a cm above the metal tip.  This was the same concept I used before for a gift for another MoD.

(1) Measurements for each garter:

Given Antonio’s persona, I searched for Italian heraldry that displayed fleur-de-lis, and found a particular device that was dated between 1550 to 1555.

After checking with Antonio that it was ok, I then drafted up a couple of patterns inspired by it.

The first one I created, (above left), had the wrong proportions, but is certainly a valid representation of fleur-de-lis from other armorials.

The second one (above right) was better, with the ‘tail’ section taking up less space in the motif, making it closer to the source inspiration. To be even truer to the shape of the original, the petals should be slightly taller; but that would need more cards, making the band too wide, so I decided to compromise.

On to test weaving!

From right to left:

Generally speaking, the more compact the motif is, the pointier the central petal is.

I already had a pattern with three rapiers crossed, so time to work the main band.

Each of the two motifs takes 48 cards total, so to achieve a suitable width, I used size 80 crochet cotton for the warp, in colours that reflected those of Antonio’s heraldry (arms).  I chose thread that would be colourfast when washed, and stand up to wear and tear well.  I used double strand standard sewing thread for weft.

I used a warp weighted setup this time, even with the thinner threads, because it’s better for my posture.  I made both garters as a single band to conserve warp. The warp was about 360cm long, to allow for up to 50% take-up plus wastage. I also allowed enough extra for one restart in the event of any major mistakes, and for a sample for my collection.

The warp tension was a challenge at times. Despite each card being identically weighted, there was a variation in warp tension across the band, which lead to striations on the finished piece.  I’m reasonably certain that the main issue was with individual warp threads being slightly too loose. Luckily, wet finishing and pressing dealt with most of the defects .

I worked the first garter from tip to buckle (E to A in diagram 1), then marked the midpoint of the band with two parallel horizontal stripes. I continued onto the second garter working from buckle to tip (A to E).   I turned the border cards on every row, because turning them on alternate rows doesn’t shorten the motif by much if any at all.

Once I’d taken the band off the cards, I wove in weft ends and trimmed the excess warp.  I then steam pressed the band gently to even out minor irregularities.  And finally, I wrapped it and sent it on its way to Antonio.