I’m working on a tablet woven band in pure silk at the moment, and it reminded me of another project I undertook a couple of years ago.  Lena and I had hatched a plan for some trim for new garb. We’d both measured the neckline, cuffs and lower hem of an existing tunic,  and agreed we’d probably need about 4.5-5m of trim to decorate all of those edges.  I then wandered of into the wilds of the internet in search of a pattern that was  viking-related, looked authentic from a distance, and wasn’t brocade. (I wasn’t feeling confident enough to try *that* just yet).

I found Mervi Pasanen’s interpretation of Birka B21, a twill version of a brocaded original. Mervi’s version utilises half turns,  has small mirrored ‘S’ shapes in a minor repeating motif, and two larger motifs one of which I think of as a “toothed S” .

Winding the warp and setting up

Below, you can see my rather Heath-Robinson idea of a warping board: one coffee table, 4 C-clamps and 2 Ikea pot-lid holders. The torn bits of paper near the warp pegs were placed after every 10 threads had been wound on. 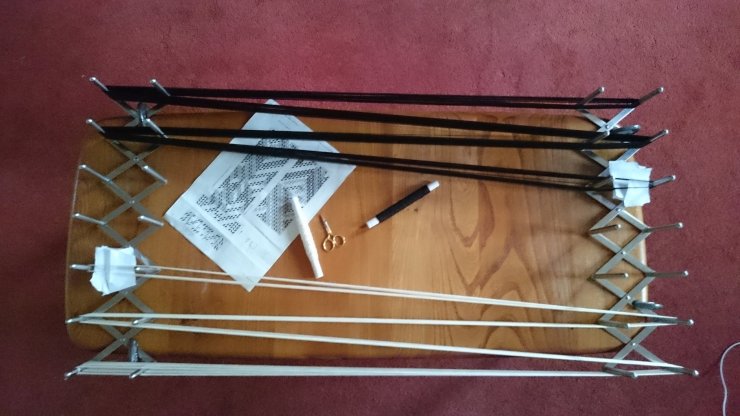 Setup was going to be warp-weighted:

The whole setup process took forever – ok, a couple of days. I was moving slowly, taking breaks, and being rather cautious because this was the first time I’d set up a silk warp. Finally I was ready to weave!!

I had very few metres of silk left after winding the long warp. Moments of practicality & inspiration struck – wouldn’t it be a good idea to do a short test piece before diving into working on the really long warp?  I got the books out, and realised I’d have just enough to make a length of one of the small ‘S’ motifs from Applesies and Fox Noses.  I produced a piece of trim about 1.5m long, ~7mm wide. Again the borders varied from the pattern as printed, so that I could use as much of the remaining silk as possible.

Back to the main band

After a break, I started working on the long warp. It went a lot more smoothly than I was expecting, if a little slowly. After working about a metre of warp, I was averaging 90 minutes to cycle through the 3 minor repeats and one major motif. This *really* bugged me! I ended up taping the pattern to the chair close to the warp, so that I could flick my eyes between the cards and the paper without turning my head. I then tried focussing exclusively on the pattern, and turning cards without looking at them. After working like this for 2 metres, I had reduced the average time to about 60 minutes.  Naturally, I made mistakes, and those took time to correct. Still, by the time I was nearing the end of the warp, I was working more consistently and with fewer errors.

Speaking of the end of the warp, it was such a good feeling seeing the leader threads appearing from the bobbins. They’re the bright blue threads below. You can only see one or two here at the edges, because the border cards took up thread more quickly than the pattern cards.

I had an occasional issue with the outermost border cards, either forgetting to turn one, or turning it too often (you can see the effect viewing the band edge on). The silk was showing signs of wear, so I didn’t want to risk unpicking up to 12 inches to correct something that wouldn’t be noticeable once the trim was sewn to a garment.

I am really pleased with the final result. The finished band was 6.1m long and about 16mm wide. It took a few months to complete, working at it on and off in between other commitments.

Where did the trims end up?

They were a gift for Master Richard the Rampant upon his elevation to the Order of the Pelican. Her Excellency Lena the Red made a red wool tunic, and used both the test piece and the wider band to decorate the neckline and cuffs.