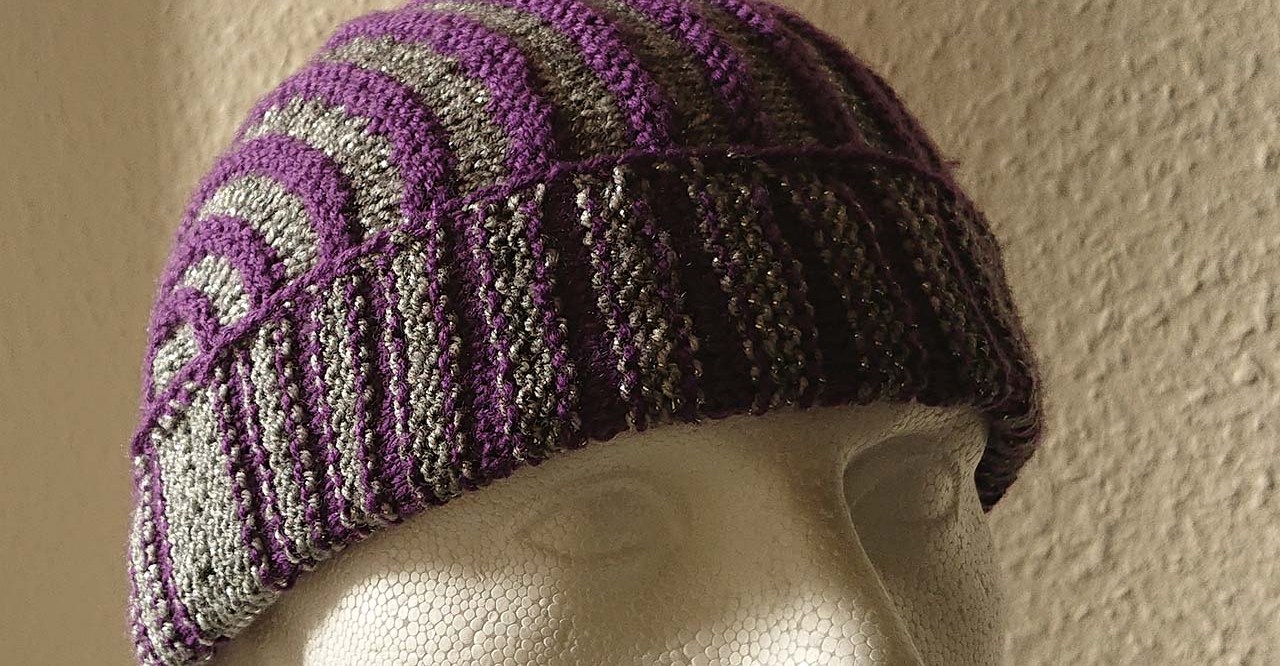 While helping out at Drachenwald’s Kingdom University last weekend, I tried out the ‘Striped ridges cap’ from from Mathew Gnagy’s book “Knitting with the Modern Maker“. The pattern is inspired by a sixteenth century Italian sideways knitted cap. I found the instructions clear to follow, and it was a fun quick knit. Of course, I tweaked things, so here’s what I did!

The pattern called for a long tail cast-on, and whip stitching the sides closed to complete the hat. This is a perfectly reasonable approach, but I decided to do things slightly differently because I wanted an invisible join. I also realised that even if I achieved the required gauge, the hat may not fit the large head it was destined for.

I began by casting on over two circular needles, using Judy’s magic cast on, and added an extra 12 stitches to the cast on stitch count. This gave me 54 stitches on both the main needle and the ‘holder’ needle. The extra 12 stitches make the cap a little deeper. Leaving the ‘holder’ needle to dangle, I worked a couple of rows stockinette, before returning to the pattern and joining in the contrast colour.

While working the straight section, it became obvious that while I was actually ‘getting gauge’ the hat needed to be wider. So, I worked an extra set of stripes before starting the decreases. This meant the hat would fit comfortably without being over-stretched.

When working the final rows in the main color, I made sure to match the number of rows at the start. It turns out I’d done two rows two many at the beginning, but no worries as long as the end matched. I finished off by closing the sides with kitchener stitch. (Yes, I need to practice that technique more). I then crocheted slip stitch round the bottom edge, because I wasn’t happy with how I’d carried the colors up the side of the piece.

It’s been quite a while since I’ve done any serious amount of knitting, and this was a very pleasant straightforward reintroduction. Straightforward?! Yes, because the pattern is written out entirely, row by row. It made it really easy to follow. I definitely want to make more of the items from ‘Knitting with the Modern Maker’, but first – more tablet weaving!!