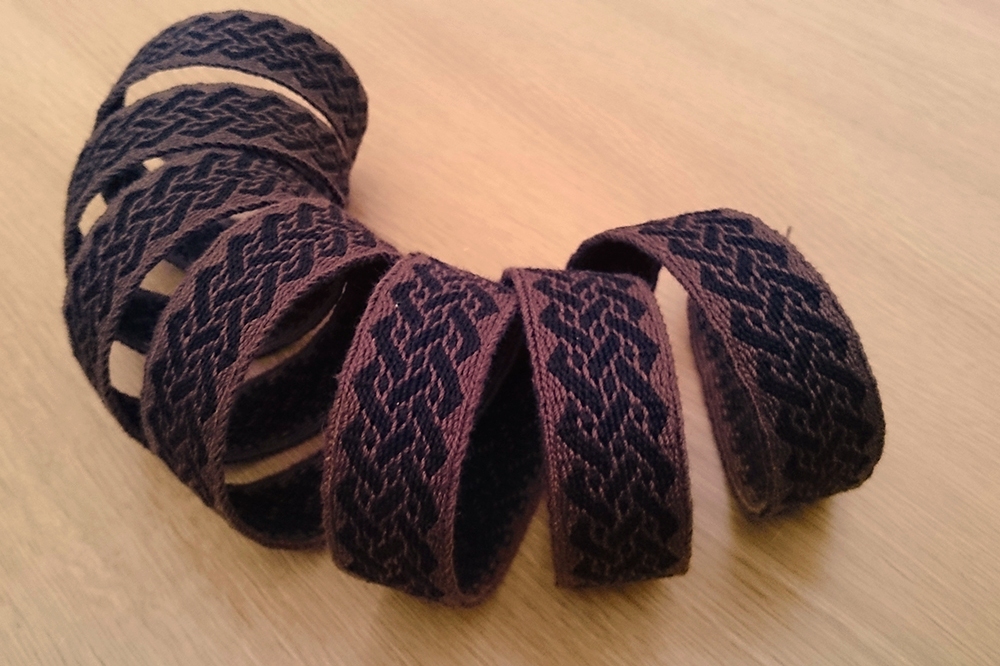 At Raglan 2017, Viscountess Lena the Red asked me if I would make her a band that was reminiscent of the braid for a free scholar in the Drachenwald Academy of Defence, and which reflected her preferred viking persona. At roughly the same time, Lady Catlin le Mareschale asked me to show her how to do tablet weaving, so that she could look at making fencing braids for early viking or similar personas.

After a little thought, and a chat at a shire meeting, I suggested a variation of the threaded-in version of Birka B22, first popularised by Carolyn Priest-Dorman.  B22 was originally a brocaded band; the sketch for it appears as figure b, on page 83 of Agnes Geijer’s “Birka III”.

Lena expressed a preference for a dark background and low contrast, so I worked a test piece in black and darkish brown. Traditionally a fencing braid is worn on one arm. As the braid was destined for fighting kit, I suggested no 10 crochet cotton for the warp, which would still produce a relatively flexible band that could be tied round the arm or attached. I made enough for two cuffs, so that Lena could choose how to use it.

Bands for other ranks in the Academy of Defence

Having made Lena’s band, it occurred to me that all the different academy ranks could be represented using the same pattern. I started playing around with different colored threadings, and found a few possible variations for each rank above scholar. I didn’t weave each one, but I checked them all in GTT.

I wanted to create a document that I could give to Catlin after showing her the basics of tablet weaving. It should be able to help her start another project by herself, so it needed to go beyond just the basic pattern chart.  I thought back to when I was re-learning tablet weaving, and the things I found myself doing to help understand what was going on.   After some consideration, as well as the chart, I included these features:

I hope Catlin and anyone else who uses this handout finds it helpful.